su·per·sti·tion :: a widely held but unjustified belief in supernatural causation leading to certain consequences of an action or event, or a practice based on such a belief

A simple college student. Those were the words that once described you, and you would’ve shrugged your shoulders in agreement. Your day was a never-ending cycle of the same thing. Wake up, go to class and study, work, visit your uncle, go to sleep, have traumatic nightmares, and repeat for another day. So, it would be an understatement to say that you didn’t sign up for this.

You didn’t sign up for the supernatural, to learn that werewolves, shapeshifters, witches, demons, and angels all exist. You didn’t sign up for the target that now resides on your back, and the list of names that have you to blame for their untimely demise. And now, to add on to everything else, an old friend is re-appearing. Everyone has a secret, and you have no idea who you can trust.

Fight and hunt that which goes bump in the night. And avoid those that hunt you for their own purposes. Meet others with their own agenda. The world has shown its true colors, it’s up to you how to deal with it.

Superstition is for 18+  due to dark themes, alcohol references, gore, violence, and sexual themes. Reader discretion is advised.

thanks for this amazing story

I really love this story and cant wait to read more in S2 <3 Of course i love the most mysterious, angry shadow ever.  I love this adorable gang of misfits.

Awww I love this game so much! I was even more excited to buy the Wayward Road! I can't wait until season 2! Keep up the awesome work!

Will you ever create a discord server for this?

This is amazing can't wait to see more!

*still love it a lot!

Truly excited for all upcoming Tuesdays. I am loving the introduction to this universe. Can't wait to see more of your written art!

This is incredible really, I can't wait to see more, there are so many choices!!! It was almost like being a real protagonist in a book.  just WOW. 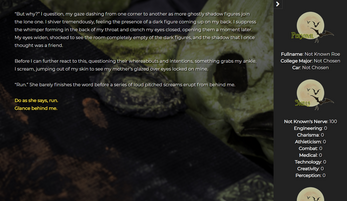